­“The Karate you practise reflects how your live and think.

When you change how you act, your karate will change accordingly.

YOU are in the Karate you practise.” 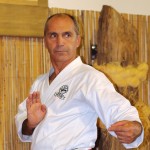 During the usual European seminar IKGA (International Karate-do GojuKai Association), an international association that practices and divulges the Goju-Ryu style of Yamaguchi all over the world, an important as well as significant recognition was conferred on Maestro Mario Laurini (already 5th Dan of the above association). In fact, the Master of the Shu Ren Kan school in Fidenza was awarded the Renshi Shihan degree (Master to be taken as an example) directly from the current head of the school Saiko Shihan Goshi Yamaguchi and the head of the European bloc Hanshi Ingo De Jong.

In July at Fudenji, the Zen temple of Bargone, Master Mario was the protagonist of the ceremony for the delivery of the Rakusu and received the name Tenshin from Master Fausto Taiten Guareschi which means candid, sincere, with no further plans.
Master Mario recounts: “The delivery of the Rakusu was a highly exciting ceremony, full of meaning.
Receiving from my first Master the “new” name, made up of the union of two kanji, one of which taken from his, had a profound affective value for me. Sharing this moment with my closest students and friends made it even more important. A special thanks for their presence to the maestro Andrea Buttazzoni from Udine and to the inevitable Giovina. “”

The city council of Fidenza has decided to confer the nomination, in the sports field, of “Fidentino of the year 2017” to our Master Mario Laurini.
“.. A great man who for years has collaborated with our town, bringing with his boys the name of Fidenza to high levels and not only in the regional or Italian but also worldwide. A person who promoted his discipline as a school of life .. “(Davide Malvisi)

Master Mario Laurini started practising Karate with Master Fausto Taiten Guareschi in 1973, when he was 14 years old, and became Shodan after about 4 years. Under Master Guareschi’s guidance, he also learned principles of Shiatsu, Iaido, Self-defence and Judo up to 1st kyu level (brown belt). In the mid-80s, he began to study Yamaguchi Goju-Ryu with Master Tadao Nomachi, achieving 3rd Dan and qualifying as a national Master instructor. In 1994, he took part in a seminar in Italy conducted by Saiko Shihan Goshi Yamaguchi. He was so highly impressed with the simplicity, accessibility and unequalled technical level that he immediately defined it as “living Karate”. That encounter would mark the start of increasingly more frequent contact with the parent school, resulting in his first study trip to Japan and achievement of 4th Dan Jokyo (assistant Shihan). That experience deepened Master Mario’s desire to learn. He found deep satisfaction in participating in international stages, improvement and masterclass courses, aimed at enhancing his knowledge and skill in martial arts. At the same time, he was becoming increasingly convinced that he could put his learning to even better use by sharing and teaching it to others. In 1998 and 2000, he attended the “Progetto Scuola” masterclass courses held by Master Aschieri, Technical Director of the Italian National Squad, who further certified his professional capabilities in teaching pre-adolescent, adolescent and adult students. Master Mario has collaborated in physical education programmes with various educational institutions from 1998 to 2015-6, from nursery schools up to the University of Parma (official trainer of the alumni Karate team).

Master Mario become an Italian National Self-defence Trainer in 2001, a skill perfected in Okinawa in 2004.

and Japanese IKGA International 5th Dan in July 2011 in Budapest.